Today, at Unesco’s headquarters in Paris, a formal partnership agreement has been signed between Unesco and Inria to establish a framework for collaboration on preserving the knowledge embedded in software source code, and making it widely available.

These are two key pillars of our mission here at Software Heritage, and we are extremely excited to see awareness raising to the highest levels.

At the official ceremony, Ms. Irina Bokova, Unesco’s director general, Antoine Petit, Inria’s CEO, and guest of honor of the ceremony, French president Mr. François Hollande, delivered inspiring speeches touching upon the importance of software, computer literacy, and freedom to access and learn from its source code. Software Heritage’s CEO, Roberto Di Cosmo, was part of the delegation that welcomed the french president.

Over three hundred special guests attended the ceremony: besides our current sponsors, that were right on the front line, we were delighted to welcome academics, government officials, industry players, various NGOs, including free software organisations, and official delegations from several countries like the United States of America, the Netherlands, Italy and China. 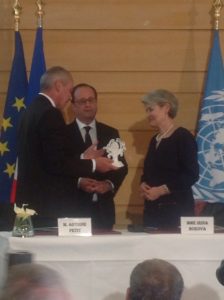 At the end of the ceremony, a special commemorative object has been presented to Ms. Irina Bokova and Mr. François Hollande: created with a program now safely stored in Software Heritage‘s archive, it is inspired by Klimt’s Tree of Life and sports prominently our logo at the center.

You can print your own on a 3D printer, just download the source code, and follow the instructions provided in the header: yes, you can modify it and play with the parameters to get your own unique variant!

After the ceremony, special variants of this object have been offered to the Software Heritage sponsor delegations present at the ceremony.

All the Software Heritage team attended the event, wearing outfits that are not really going to be seen often on us: here is a collector picture just for you!